A practical guide to creating A/B and Multivariate Tests

What is A/B Testing?

A/B testing (also known as bucket testing or split-run testing) is a method of testing the performance of two variants of an entity (Eg web page, email) by performing a controlled experiment. A/B Testing is a way to compare two versions of a single variable, by testing the user’s response to variant A against variant B and determining which of the two variants are effective.

How to Perform A/B Test?

Let us take the example of a hypothetical e-commerce store, where we would like to find out the best landing page which has a better opportunity for conversion.

Create a new version of the existing landing page which you think has a better chance of increasing the conversion rate of the store. Now let the traffic in your e-commerce store flow through the old landing page and the new landing page in equal proportions (50:50).

Run this test for some time (More on how long to run later) and analyze the results.

Analyzing the results of A/B testing:

Let us consider the outcome of the test in two different scenarios.

Even though the conversion rate of Variation (B) looks better than the Control Group (A), it is not statistically significant and we can’t tell with confidence if Variation (B) is better (under default conditions).

Here the conversion rate of Variation (B) is better than Control Group (A) in a statistically significant way (under default conditions). Even though Variation (B) in both scenarios is similar they both have different statistical significance levels.

(If you are curious what the default conditions for statistical tests are then they are significance level of 0.05 and a two-tailed test.)

How to determine if the result obtained in an A/B test is statistically significant?

The Significance Test that we are about to perform is Z-Test.

It begins with defining a Null Hypothesis H0 which is believed to be true. The assumption in our example is that the conversion rate has remained the same despite the changes in the landing pages.

The next step is to state the Alternate Hypothesis Ha, a statement what a statistical hypothesis test is set up to establish. The assumption in our example is that the new landing page has either increased or decreased the conversion rate of the store.

The new sample evidence obtained by running the variation (B) is used to determine the validity of the null hypothesis. We can reject the null hypothesis when the probability (known as P-value) of it being true is less than a certain threshold. This threshold is often called the Significance Level (alpha).

There are two types of Z-tests namely, One-Tailed Test and Two-Tailed Test.

When the alternate hypothesis has the condition

μ is the conversion rate in the e-commerce example.

Eg When the Significance level is 5%, 2.5% is the rejection region on both sides of the distribution.

μ is the conversion rate in the e-commerce example.

Calculation of P-value is done in two steps:

1. Calculation of Z score by the formula

2. Lookup of P-value from the Z table shown below.

Depending on the type of test (One-sided or Two-sided) find the P-value from the z-score. 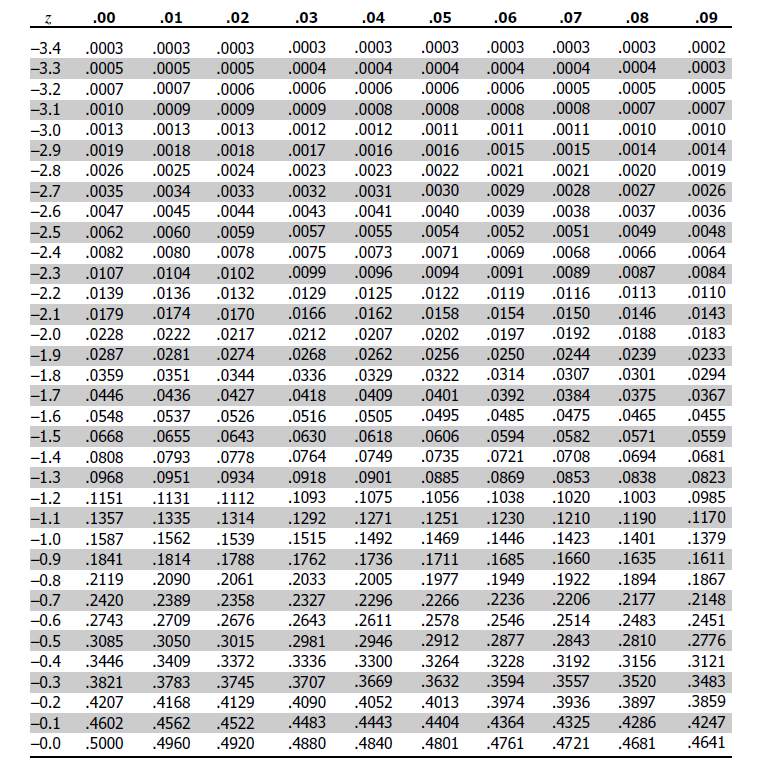 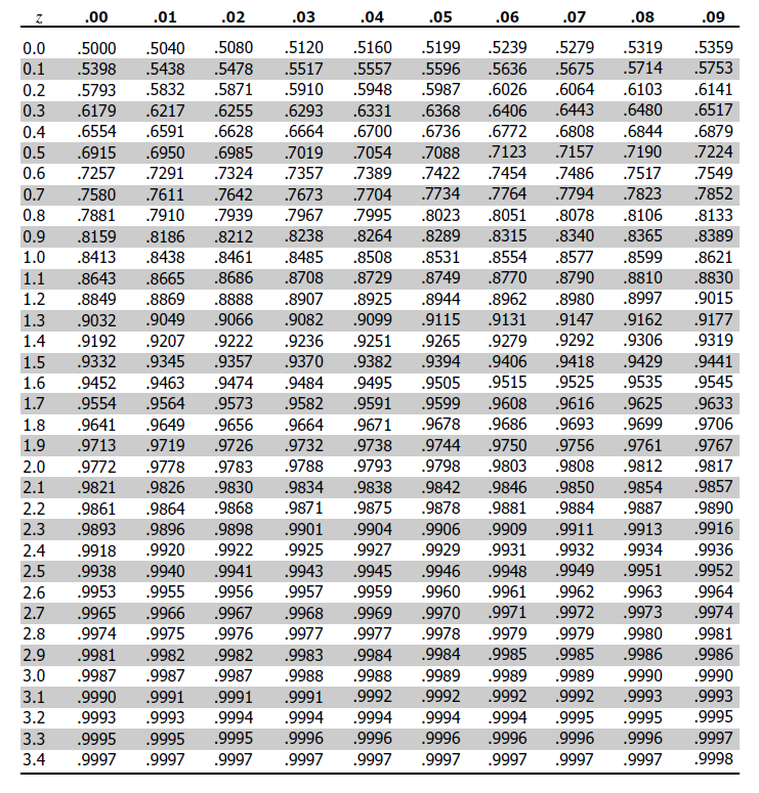 If the corresponding P-value is less than the Significance Level we can reject the null hypothesis and declare new findings as statistically significant.

Determining the Sample Size for Tests

The sample size must be predefined before we start significance tests. To calculate the sample size, we need to understand Power in Tests of Significance and Minimum Detectable Effect (MDE)

The conventional value for power in a significance test is 80% (0.8) and this is pre-defined before running the test. (Similar pre-defining significance level)

The Minimum Detectable Effect (MDE) represents the relative minimum improvement over the baseline that you’re willing to detect in an experiment, to a certain degree of statistical significance. MDE is a parameter that measures how the sensitivity of the test. If the experiment is less sensitive (High MDE) then a low sample size is sufficient and if the experiment is more sensitive (Low MDE) more sample size is required.

For eg in the case of e-commerce, store changes are made to multiple sections of a landing page, and then variations are created for all the possible combinations of those changes.

The traffic in multivariate tests will be split by N ways where N is the number of variations including the control group.

In the e-commerce store, the traffic on the landing page is often limited and it may take a long time before we can reach statistical significance. The A/B testing often avoids this problem since the traffic for the experiment is split in half between control and variation.

A/B testing is best when you have less traffic on your landing page and need to conclude the test faster. Multivariate testing is best when you have a lot of traffic and can afford to split the traffic in N ways. Even though A/B testing and Multivariate testing have both pros and cons they are nonetheless both powerful optimization tools that help you find the best variant in your experiment.