At DeltaX, we have multiple use-cases of Redis.

This article talks gives a little background on how we latched onto Redis, some gotchas, and some free advice :)

A couple of years ago, we took the horizontal scaling approach for our web app. Being a .net MVC app, we took advantage (read as misuse) of ASP.NET’s Session.

And that was what held us by the neck when we needed to scale out! Session was an in-memory, per instance (of the app) object.

That’s when we stumbled onto the Session State Provider. This allowed us to offload our Session into a Redis instance (without any code changes!).

So, we started off using a standalone self-run version of Redis on our bare-metal servers.

Well, we’ve moved on from bare-metal to a cloud-first company. So naturally, we picked Azure Redis.

No fuss setup and monitoring right out-of-the-box. Our App Service (on Azure of course), was happy interacting and using Azure Redis as it’s Session Store.

Having a full managed Redis meant we had stats right in fron of us. 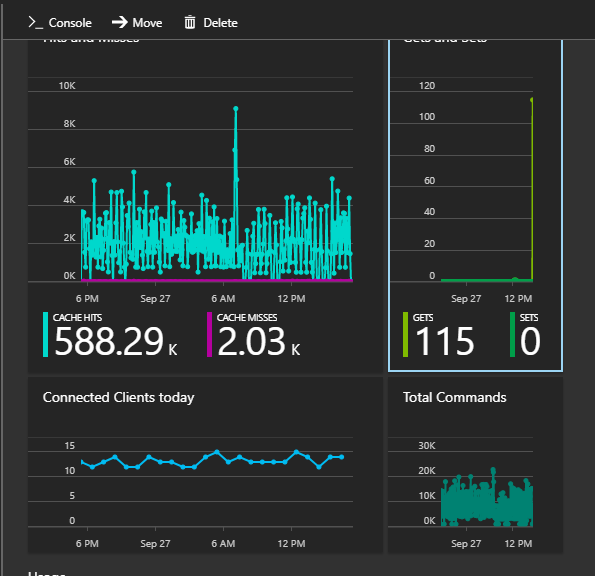 We are still happy (please do read the gotchas section below) with using Redis as our Session Store.

Redis as an entity cache

Our tracking system maps web data (clicks, impressions) to the campaigns that advertisers are running.

Our primary DB is Azure SQL Database. The processing workers were constantly querying the entity tables (Campaigns, Adgroups, Ads) to map (JOIN) the log level data to the ads.

This caused high usage (DTU) of our DBs. But the funny bit is that this data was not continuosly changing - it was pretty static. Voila, the perfect use case for caching the results of the queries.

Here comes Redis again! We built an intermediate cache layer for our workers.

The Redis magic is in Step 3 - “Get Entity Data from Cache”.

As this dialogue makes it clear, this shared cache is pretty useful to us. Especially because we process clicks and impressions in parallel. But they are typically looking for the same set of Ads.

Redis to hold a usage counter

We use Redis to hold usage stats. Everytime someone visits the home page, we log this usage data into Redis.

Later, we sort this in a descending fashion and call these our frequently used business profiles.

We run a warm-up script for these profiles.

Here’s the description of the usage : User visits home page of Profile 1 -> Increment number of visits for Profile 1

We use Redis’ INCR to track a global counter.

At a later point in time, we get these visit info from Redis and run a warm-up script for the top visited profiles.

Everything has it’s kinks. So does our usage of Redis.

We faced this sort of timeout issues on an ongoing basis. That was until we had Azure Support look into the issue.

This usually occurs due to sudden burst in the request/response being processed by the application. You should consider configuring your threadpool setting to handle such scenarios. The bottom line is the no. of Minimum threads in the threadpool should always be more than the busy threads. In another word, there should always be some threads already available in the threadpool to serve the requests. Please have a look at the article below for more details: https://github.com/StackExchange/StackExchange.Redis/blob/master/docs/Timeouts.md#are-you-seeing-high-number-of-busyio-or-busyworker-threads-in-the-timeout-exception

We have managed to fix this with the following approach :

You have been warned! If you do not follow recommended practices for connecting to Redis, you are likely to face connection troubles.

The recommended pattern suggests to use ConnectionMultiplexer and re-use the same object for subsequent connections.

In our case, turns out that using ConnectionMultiplexer in an Azure Function was a bad idea. Everytime the function was invoked, a new connection was made to the redis server. And since the functions don’t die after completion (Always ON functions), the connections are not disposed either!

As in most cases where a leak occurs, a simple using block sufficed.

https://stackoverflow.com/a/38485996 So be cautious when using StackExchange.Redis in an Azure Function!

We faced an issue a little while ago (a week or two ago). The issue was that the web app was unusable - turns out, this Azure function ate up all available connections and our web app (which is using Redis for Session Storage), couldn’t connect to the Redis instance. Bummer!

There are also some interesting experiments with Redis.

Being a super fast, in-memory store (and support for persistence) means that Redis has a wide array of uses.