Recently HackerEarth organised a machine learning competition in which we had to predict probability of an ad getting clicked or not. I managed to secure 32nd position out of around 5000 participants registered at this event. In this post I would like to present how I came about creating a pipeline that could model the underlying process.

Variables in this data set are anonymized due to privacy. 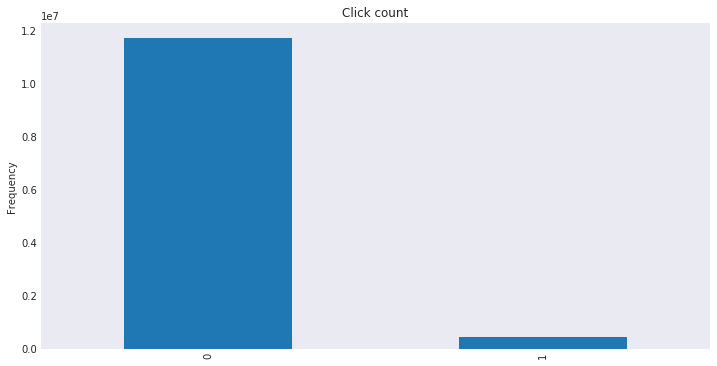 AUC ( Area under curve ) was chosen as the evaluation metric by the organisers and rightly so becuase of the imbalance in the target variable. Very few ads received a click and if accuracy would have been chosen as the metric then a model that would always predict ‘no’ click would get 96.3% accuracy on the train set, that would not have been ideal. You would like a model that would predict whether an ad would get a click or not which will have an impact in the decision making process. You can read more about the metric here

Snapshot of some of the examples in the training set 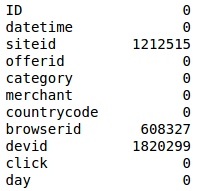 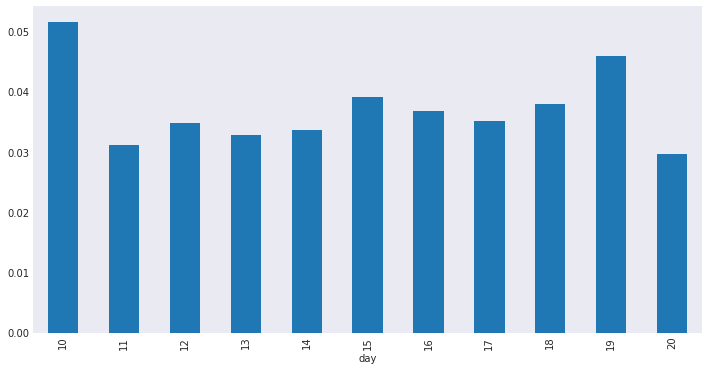 After looking at the click probability by day we took a decision to not create time based split of training data but instead created two folds (50-50) and ran all the models against these two splits for comparison. 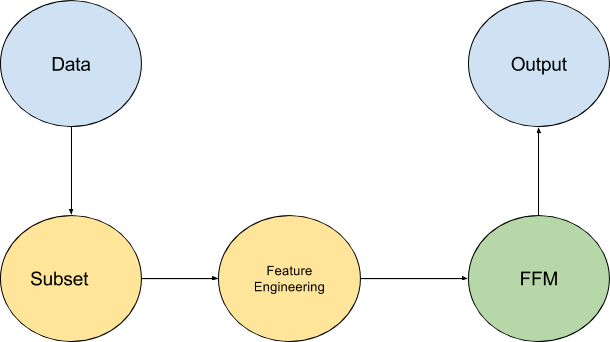 In this competition, instead of working with full dataset, we included only those siteids that were present both in train and test set. This gave us slightly better performance on the local validation set.

Except the raw features, we generated following additional features 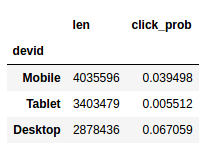 Above plots show browser and device have a lot of predictive power.

We used hashing trick to transform text features. It is a way of applying a hash function to the text features and using their hash values as indices directly.

We used field aware factorization machines which have proved to work very well with this kind of data where most of the features are categorical with very high cardinality. To give a general sense of why this method works for these kind of problems, we need to know what is matrix factorization and how all of this related to predicting whether an ad would get clicked or not.

It is a way of decomposing a matrix into a product of matrices. In case of recommender systems, given user-items matrix Matrix Factorization maps both users and items to a joint latent space of dimension k. Each dimenstion of the latent factor space can be explained as topic, say comedy vs drama and interaction between user and item can be modelled as the inner product in this space.

Factorization Machines are able to model interaction between two features but what if there are more than 3 dimensions. For example in this problem we have website, offer, merchant etc. There is not only interaction between website and offer, offer and merchant but also among all 3 features. Field aware factorization machines can handle these interactions. Here field means dimension (siteid, offerid, category …). for example

FFM would create latent vector as

In case of FM, we see

There is only one latent space, so Wespn is used to learn the effect of with NIKE and MALE, which is a limitation which is addressed by FFM as it uses different weight vectors for every feature based on the field of other feature in the pair.

You can specify k ( which is the number of dimensions of the latent vector ) and t ( training iterations ) to get the most out of your model. We used the two folds (50-50) to come up with the optimal settings.

Running this whole pipeline gave us .68047 AUC on the private leaderboard.

I hope that this might give you an intuition about how to solve these kind of problems. As always looking forward to your comments and feedback.